A meeting was called to order at 3 p.m. and the following gentlemen were present: F. A. Hendry, F. J. Wilson, W. H. Towles and John Powell. Mr. Hendry made a motion to place Mr. Towles’ name in nomination for the President of the Board of County Commissioners. Mr. Towles and the following men James Bain, Clerk of Court; N.L. Langford, Collector; James E. Hendry, Treasurer; I.S. Singletary, Assessor and Thomas Langford, Sheriff were unanimously elected to the new government of Lee County.

Not much is known about our first Clerk of Court. There are no existing photographs of Bain. His name is on early recorded Land Records in the Recording Department. The second floor of the Towles & Hendry Store was rented by the county for $250 a year to serve as the first courthouse of Lee County. There is an existing photo of men standing in front of the building titled County Officers, Lee County. Not all of the men in the photo are identified, so it is possible James Bain is in that photo. A building nearby was rented for $120 a year for the Clerk of Court's office. Clerk Bain ran this office along with his Deputy Clerk, L.G. Thorp. Some of the well-organized original documents are still maintained at the Clerk’s office. They include original County Commissioner documents and maps that were hand drawn on linen. 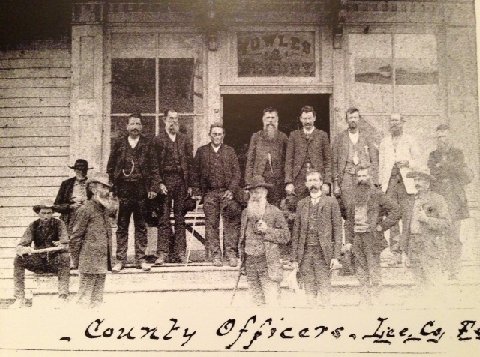 L. G. Thorp succeeded Clerk Bain in 1892. While not much is known about him, he did maintain excellent records. The handwritten documents are beautifully written. The first courthouse was built in 1894, so it is believed the building next to the courthouse for the Clerk of Court was built about the same time. Clerk Thorp died while in office. In the photo, the Clerk’s office is in a separate building to the left. 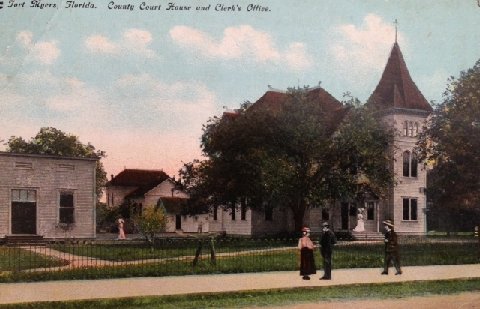 William Marion Hendry was a member of the State Legislature from Polk County in 1871. Shortly after moving to Lee County, he was appointed by Gov. Mitchell as Clerk of the Circuit Court to fill the term caused by the death of L.G. Thorp. After filling the vacancy, he was elected to continue his service. William Hendry's son Henry Asbury Hendry worked for his father as Deputy Clerk. Sam Headley was also a Deputy Clerk for William Hendry. Today we see many documents signed by W. M. Hendry, Clerk of Court; H. A. Hendry, Deputy Clerk of Court; and S. Headley, Deputy Clerk from that time period. They were the keepers of the records. The first entry in the Book of Marks & Brands was in 1899 and documented by the Clerk of Court. A 1912 interior photo of the Clerk’s office has Henry Asbury Hendry standing in the center of the room and Sam Headley on the right. There is a map on the back wall and a sign above either a door or a vault that reads "Lee County Recorder". Clerk Hendry passed away in 1914 but lived to see his son become Clerk of Court. 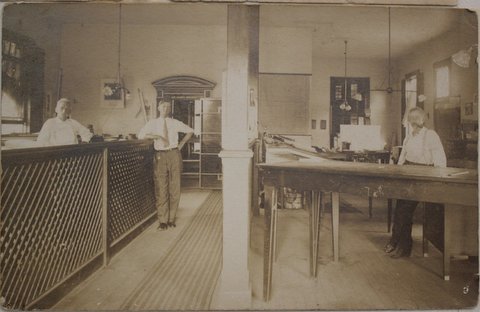 Hendry wore many hats in the early history of Lee County. He was the Mayor of Fort Myers from 1906 to 1908, while also serving as Deputy Clerk for his father William Marion Hendry. Hendry invested in real estate in Lee County and owned many parcels of land early in his life. The early records of Lee County show him buying and selling property. In 1914, William Towles and his men tore down the courthouse next door to the Clerk’s office to make way for a new courthouse. Clerk Hendry and his employees removed documents from the building before it was demolished. A photo of the original construction of the courthouse is on the second floor of the Lee County Courthouse in a glass case. In 1915, the new Lee County Courthouse opened for business and the Clerk’s offices were moved inside the new building. 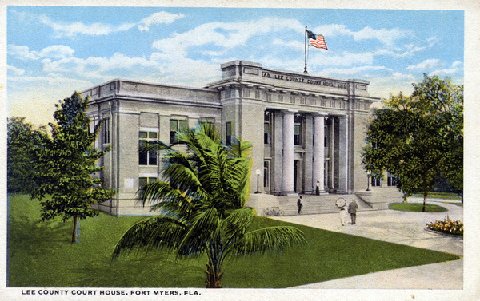 J.F. Garner maintained excellent records. He had many friends and was well liked and respected in the community. When his untimely death occurred at the age 54, the community was devastated. The coroner said it was a suicide, but close friends said it was an accident as Garner was cleaning his gun and it apparently went off. The bullet entered his body just below the heart and he died within minutes. The entire courthouse was closed the day of his funeral.

Odom served as a Deputy Clerk under Clerk Garner and temporarily filled the position after his death until C.W. Carlton was appointed by the Governor. He had the shortest term of being Clerk of Court in the history of Lee County. Odom continued his duties as Deputy Clerk.

Carlton was appointed to fill the position of Clerk of Court due to Clerk Garner's death in January 1932.

Draughon was another Clerk whose life was cut short at the age of 42. He died at Lee Memorial Hospital after complications set in following an appendicitis operation. He was well liked and respected by the Fort Myers community.

Esther Draughon was the first female Clerk of Court. It would have not been her choice but she was appointed by the Governor when her husband Walter Draughon died unexpectedly while in office. Esther served the term as Clerk of Court in honor of her husband.

Farabee ran a tight ship, and he was well liked and respected by his employees. By the mid-1950s, the Clerk's office was expanding. The 4-story Administration building at 2115 Second Street was completed in 1962, and the Clerk's office moved to the second floor of the building. In 1972, the fifth and sixth floors were added to the Blue Courthouse, as it was called by many. Clerk Farabee retired in 1972 and died in 1977. 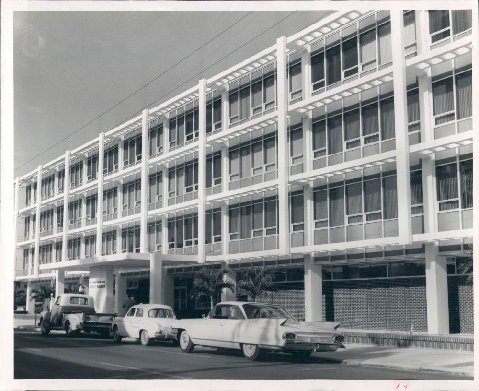 Geraci was one of the most popular Clerk of Courts. He interviewed his employees personally. To him, family came first, and it reflected on how he treated his staff. One young woman had only been on the job two months when her mother fell ill in another state. The young woman feared she would lose her job if she went to her mother's bedside. Clerk Geraci told the young woman “go and take as long as you need, your family comes first.” During the years of 1973-1984, the Clerk's office continued to expand. During that time, the Clerk's office had offices in the basement of the old courthouse, the 2nd and 3rd floor of the courthouse and in the annex building on Main Street, photo below. Sal Geraci's administration was the end of an era, as it was before computers. When he died in 1984, the entire Courthouse closed its doors for his funeral. It was standing room only. 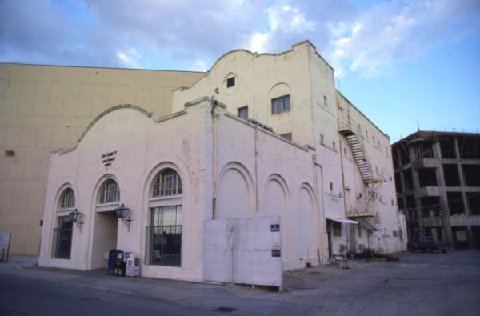 Kurtz was a long time Deputy Clerk when she was appointed by the Governor to replace Sal Geraci due to his death. She was the daughter of Clerk of Court, DeWitt Farabee. Lois Kurtz had been the supervisor in the minutes department and was ready to retire when she was appointed. She decided not to run for Clerk of Court when the time came to do so.

Green moved the Clerk’s office right into the age of the latest technology. The office went online and records became easily available to the public. Green’s war on waste saved the Clerk's office thousands of dollars when he was in office. He was an outspoken critic of county spending and higher taxes. In 1984, the Lee County Justice Center opened and most of the Clerk's offices moved from the courthouse to the Justice Center. When Lee County was in a recession in 2005, Clerk Green had all his employees cross-train to do all jobs within their department. Clerk Green was held in high esteem by his employees. He began the tradition of hanging former Clerk of Court photos on the walls of his office for historic purposes. Clerk Green retired in 2013.

Doggett was a long-time employee of the Clerk's office when she ran for Clerk of Court in 2013. She oversees a staff of 340 employees serving the Lee County population of approximately 661,115 citizens. Her door is open not only to her employees but also to the general public as well. Clerk Doggett's goal has been to keep costs down while providing quality, convenient services to the community. Under her leadership, an office newsletter and Facebook page were established to keep the public informed about new services. Clerk Doggett presents free public seminars educating the community on the Clerk’s duties and information available on the Clerk's website. She is also carrying on the tradition of adding more historic photos to the walls of her office and expanding the fascinating story about Lee County’s Clerks of Court.

Kevin was appointed Clerk of Court & Comptroller in March 2022 by Governor DeSantis. Kevin is a 14+ year veteran of the Clerk’s office and has held a variety leadership positions. With a Master’s in Legal Studies, Kevin finds his passion managing office-wide projects and legislative changes.

As Clerk, Kevin is responsible for guiding our team members through new challenges, which include managing operations through the COVID-19 pandemic and providing critical services through a booming population growth in the county.

Clerk Karnes’ goals are to continue being recognized as a premier model of exceptional government and to provide outstanding customer service to our community. Under his leadership the office vision is to expand remote/virtual services and implement artificial technology to streamline data entry processes.

by Joanne Iwinski-Miller, Board Member of the Southwest Florida Historical Society